The B.C. Ministry of Agriculture is asking Lower Mainland residents near the Canada-U.S. border to be on the lookout for a terrifyingly large invading hornet this spring.

The Asian giant hornet, a honeybee-killing predator about twice as large as native B.C. hornets, was discovered for the first time in the province last August in Nanaimo on Vancouver Island. Its nest was located and destroyed. They were thought to have come from an ocean vessel.

According to a ministry news release, a single giant hornet then turned up in White Rock last November, and a pair showed up just across the border, near Blaine, Washington, the next month.

Residents along the international border, especially those living on 0 [Zero] Avenue, from Surrey to Aldergrove, will soon receive bulletins from the province's apiculturist containing information about and pictures of the Asian giant hornet (Vespa mandarinia). Special traps will also be placed in the area. 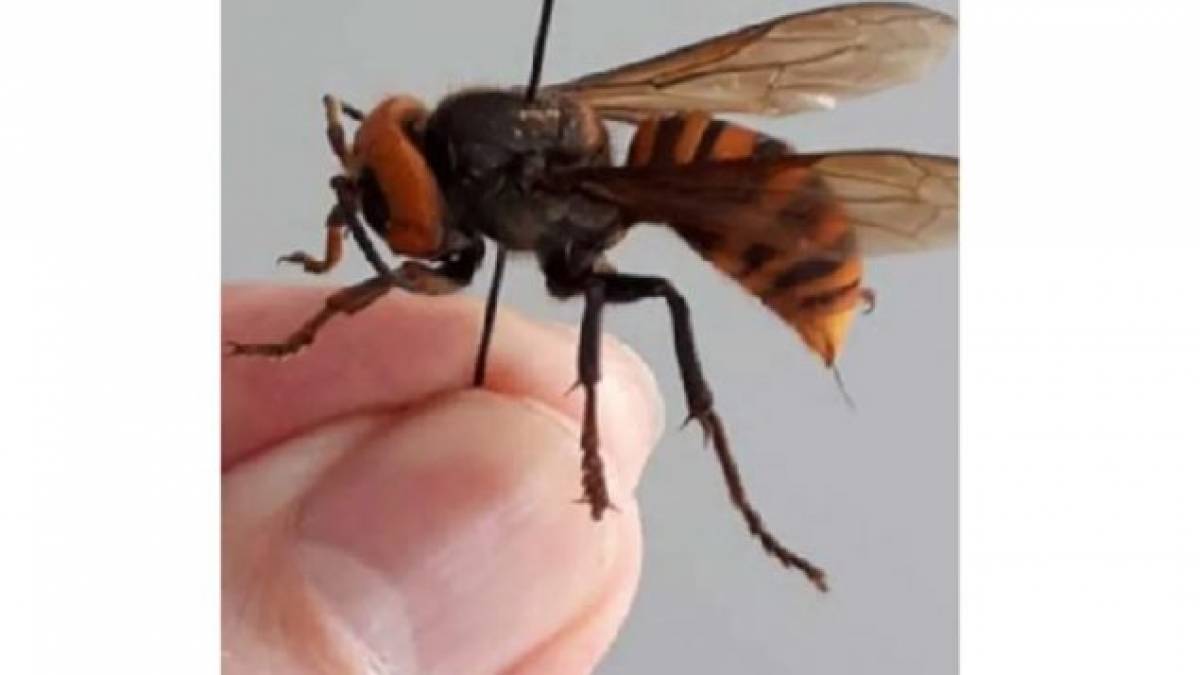 Because nearby wooded areas at the border are good habitat for the hornet, authorities think there might be an overwintering queen nearby that will emerge with the warmer weather to start a new nest.

Anyone spotting what they think is an Asian giant hornet is asked to report the sighting to the Invasive Species Council of BC at 1-888-933-3722; B.C. residents can also fill out a report online.

The ministry release states that worker giant hornets are about 3.5 centimetres long, with queens reaching up to five centimetres in length, with a wingspan of as much as seven centimetres.

Giant hornets hunt insects, especially honeybees, whose hives they invade and which they decapitate and dismember, taking the thoraxes back to the nest, where they are fed to its larvae. In Japan, native honeybees have evolved defences against hornet predation, but North American honeybees are helpless in the face of the marauder. A few dozen giant hornets can slaughter a hive of 30,000 honeybees in a few hours.

Giant Asian hornets generally do not bother or behave aggressively toward humans or animals unless they feel threatened, when they can present a threat as dangerous as that exhibited by so-called Africanized honeybees, or "killer" bees.

Reports from Asia—where the hornets' range covers East Asia (including Japan, parts of China, and Korea), Southeast Asia, and India and Tibet to the west—have blamed the Asian giant hornet for dozens of human deaths over the years. Most of those occurred after victims were swarmed and stung repeatedly by large numbers of the hornets.

Should we be worried?

People who are allergic to bee venom are at risk of developing life-threatening anaphylactic shock when stung. The U.S. Centers for Disease Control and Prevention, using statistics compiled from 2000 to 2017, estimated that an average of 62 people per year died from wasp, bee, and hornet stings in the U.S. during that 17-year period.

Wasps, Hornets, Bees.. don't know what you have?

If you encounter any wasps or hornets near your home, not to worry. Our professional and experienced technicians at Westside Pest Control will take care of it! Contact us today at 604-559-9060 or email us and we’ll ask all the right questions to develop a comprehensive plan to protect your home or business.